The fluffiest chocolate buttercream in town, perfect for frosting your next batch of cupcakes or topping a delicious chocolate snacking cake. Grab your chocolate bar and some butter, friends—let’s whip up a batch of this indulgent buttercream.

This recipe is sponsored by Endangered Species Chocolate.

What is American Buttercream? How is Different from Italian, Swiss, and French?

There are four main types of buttercream you’ve probably heard of: American, Italian, Swiss, and French. The recipe here is American buttercream and is the sweetest of the bunch. It also happens to be the most different in terms of ingredients, as it’s the only one that uses powdered (confectioners) sugar. The other three use methods with eggs and granulated sugar.

American buttercream is arguably the easiest method: essentially just beating together room temperature butter and powdered sugar. Italian meringue involves making a sugar syrup that is then whipped into egg whites until cooled, ending with beating in your butter.

Swiss meringue has you whisking your egg whites and sugar over a double boiler on the stove until the sugar is melted, whipping into peaks, and then beating your butter. Lastly is french meringue, which is very similar to Italian in starting with a sugar syrup, but it is whipped with egg yolks instead of whites (before then beating in the butter—it’s very rich).

For this chocolate buttercream, I wanted to take out the fuss of having you deal with a candy thermometer, heating egg whites, or making a syrup. It also utilizes melted chocolate, as opposed to cocoa powder, leaving you with an incredibly silky frosting.

How to Make Chocolate Buttercream Frosting

Using the above images and below as rough visual cues for each step of the process should look. Here’s how to make this super fluffy chocolate buttercream frosting!

The Perfect Chocolate for This Fluffy Buttercream Frosting

I teamed up with some friends over at Endangered Species Chocolate for this recipe! Their “Smooth + Creamy Milk Chocolate” bar was a dream for this chocolate buttercream.

What I love about them is that not only is their chocolate delish, all of their products are: fairtrade, gluten-free, non-GMO, and kosher. A majority of them are vegan too! They also donate 10% of their profits to global organizations making a positive impact on species and habitats around the world.

Learn more about their amazing mission on their website! Check out all of their varieties here and where to buy some for this buttercream recipe.

Tag me @joshisbaking over on Instagram if you whip up a batch of this cloud-like, creamy, chocolate buttercream frosting! Be sure to message me or drop questions below if you run into any issues.

Check out my most recent recipes:

Fluffy milk chocolate buttercream frosting that is perfect for topping your next batch of cupcakes or snacking cake.

This should give you plenty to top a dozen cupcakes or 8-9 inch square cake! Even a 9×13 inch sheet cake, it just might be a thinner layer.

Looking for something else to bake?

Josh here, nice to meet you!

As a self-taught baker, I’m always tackling new bakes and sharing recipes along the way. I hope you stick around and can find at least one thing here to brighten up your day.

New Recipes, Straight to Your Inbox! 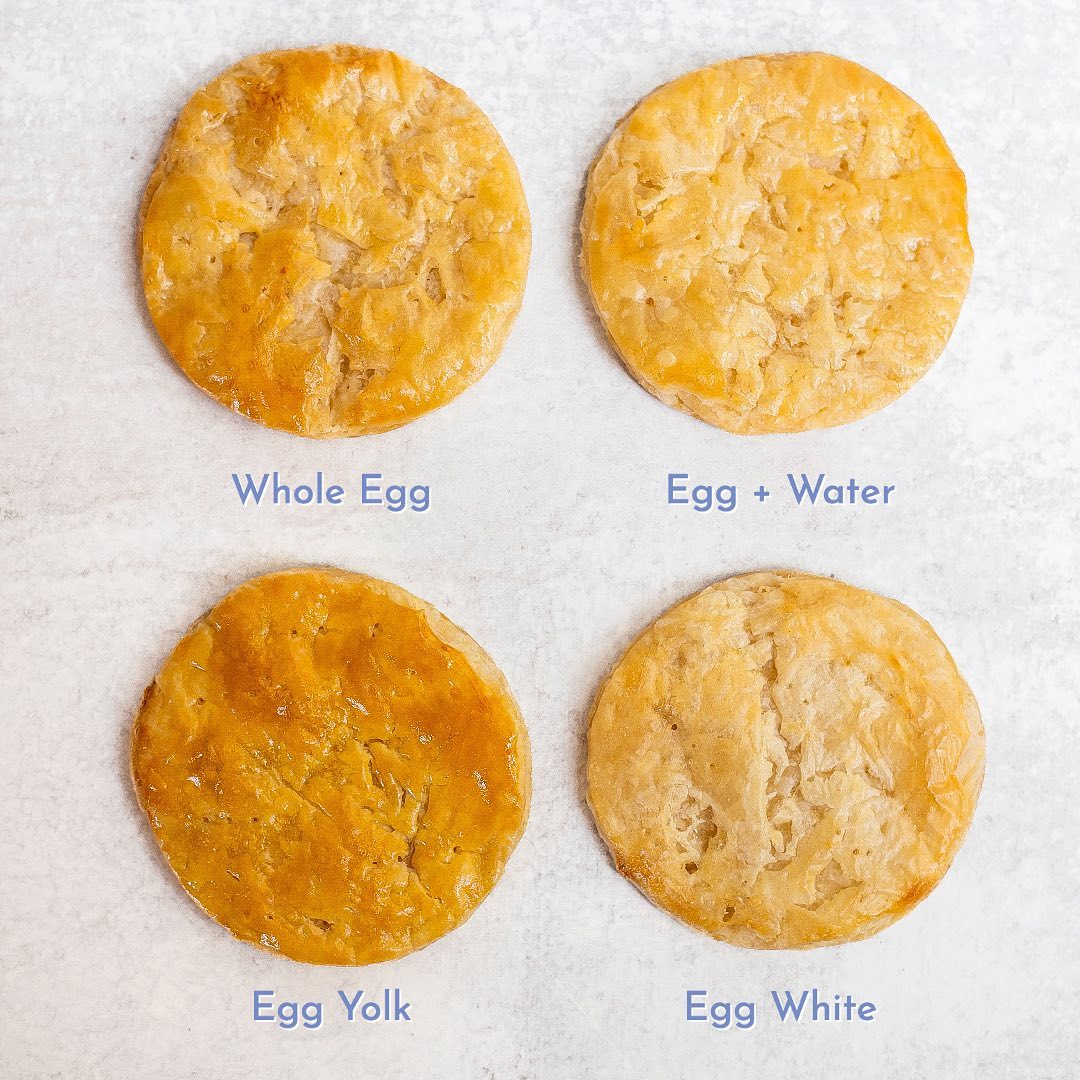 joshisbaking
•
Follow
Cater your egg wash to what kind of finish you’re looking for on those pastries or pie! 👋🏻 They all serve their purpose in regards to color, shine, and sealing properties. Get the most golden shine by using just the yolk or my personal favorite, the whole egg by itself—I find it’s the perfect blend between color and shine. ✨ Add a splash or two of water to dial back the color, but still get a decent shine. An egg white has its place too! It’ll give you more of a matte finish. It’s also great for sealing dough & avoiding soggy bottoms: brush it all over your crust after blind baking—the egg white wash creates a water-tight barrier for your crust to then continue baking with your filling. 🥧 Play around with each wash and find which you like best. Also note that the egg yolk/whole egg washes will brown faster—so keep an eye on those! Hope you learned something new here, friends. Happy baking! ❤️ . . . . . . . . . . . . . . . . . . #pie #piecrust #dough #pastrydesign #pastryinspiration #pastries #pastrylove #bakingtime #bakingclass #bakingtips #bakefromscratch #thebakefeed #f52grams #thekitchn #f52community #homebake #foodphotoshoot #foodstylingandphotography #foodphotographer #flakypastry #pastrychef #eggwash #flaky #eggyolk #eggwhites #cincy #cincyeats
View on Instagram |
2/6

joshisbaking
•
Follow
Hi friends 👋🏻, I wrote an article over on @yesapples’ site that hits very close to home, especially during #pridemonth. It’s all about my queerness and baking—why the two will always be intrinsically linked (and have to be) and why visibility/representation matters. I hope it resonates with you in some way, regardless if you’re a part of the LGBTQ+ community or not—would love to hear your thoughts or response! ❤️ Swipe for a few snippets and read the full article at the link in my bio! Xoxo, Josh 🌈 (If you’re new here and struggling with your own identity or feel you don’t have someone you can talk to—DM me and I’ll point you in the direction of resources. You’re not alone!) . . . . . . . . . . . . . . . . . . #gaybaker #bakingblog #foodbloggers #pride #pride2022 #loveislove #pride🌈 #queerpride #lgbtqpride #bakers #baking #selftaughtbaker #homebakers #queerlove #cincy #cincinnati #cincinnatiohio #ohioblogger #cincinnatipride #gayblogger #f52community #bakefromscratch
View on Instagram |
4/6

joshisbaking
•
Follow
Some random & recent non-baking, life stuff 👋🏻 : we’ve been taking walks with Taran in our old neighborhood, grabbing some @deweyspizza along the way > @amyhildebrandz joined us on one of these walks ❤️ > got Taran a new doggie water bottle I’m obsessed with 🥹 Decided to finally get my garden act together, loving this little corner patch now > another walk with @woodsomc and him giving me the bird 🥰 > Taran got the hiccups, lol. Also yes, buzzed off all my hair! This summer heat tho. . . . . . . . . . . . . . . #cincy #cincinnati #cincinnatiohio #ohioblogger #bakingblog #foodblogging #ohio #weekendstyle #cincinnatiphotographer #foodphotographers #bakerslife #homebakers #chihuahuas #dogvideos #chihuahualovers #gayblogger #pridemonth #gaybaker #cincyusa
View on Instagram |
5/6

joshisbaking
•
Follow
Hey hey, got a new recipe for you today! 👋🏻 #ad | This simple glaze is perfect to spoon over pastries (like these cute lil’ pop tarts I made), pipe onto cookies, drizzle over a loaf—you name it. The best part? It’s sugar-free thanks to @purecane’s zero calorie confectioners sweetener and comes together in just 5 minutes! Link in bio, friends. ❤️ @purecane’s entire product line is zero calorie and contains no added sugar, naturally derived from sugarcane! All the same sweetness, but without the sugar, keeping those blood sugar levels in check and most importantly—no weird aftertaste. 🙌🏻 They even have substitutes for brown and granulated sugar, which you can swap 1:1 into your recipes! This is an amazing alternative for those with diabetes or other sugar-related health issues that still want to bake up something sweet! Learn more about them and grab some at the links in the blog (or my stories today). Happy baking! . . . . . . . . . . . . . . #purecane #glaze #sugarfree #sugarfreedessert #sugarfreebaking #glazed #pastrylover #pastries #poptarts #poptart #sugarcane #pastrypassion #pastryelite #colorfulfood #bakingblogger #foodblogs #bakerylove #homebake #bakingtime #foodphotography📷 #foodphotographyandstyling #foodstylish #foodstyling #confectionery #powderedsugar
View on Instagram |
6/6